'Aussie Rick''s Reviews > Australia’s Few and the Battle of Britain

I have just finished reading Kristen Alexander’s latest WW2 aviation book, covering eight Australian pilots who flew Spitfire and Hurricanes in the RAF and fought over England during the Battle of Britain. The pilots that the author decided to cover in her book were Jack Kennedy and Ken Holland from Sydney, Stuart Walch from Hobart, Dick Glyde from Perth, Pat Hughes from Cooma, Bill Millington from Adelaide, John Crossman from Newcastle, and Des Sheen of Canberra. Of these eight pilots only one survived.

Firstly a disclosure; I was given a copy of this book from the author who I know as a result of a shared passion in Australian military history and books. My review below is based solely on the contents of the book.

Australia’s Few and the Battle of Britain is well researched and finely written, easily drawing the reader into the young lives of these eight men. We get to read about them growing up in Australia, their love for flying, their training, and the various reasons for them leaving Australia to join the RAF, then the accounts of their missions over England during the Battle of Britain.

The book is so well written and easy to read that we get caught up in their lives and loves and then are saddened as we read of their deaths whilst fighting against the Luftwaffe in 1940. You know what the likely outcome is to be with these young men but still their demise in action still hits a nerve, a feeling of loss for men the reader never knew, and in some cases had never previously heard of.

The author has utilised numerous first-hand accounts, after action reports, diaries and letters to help tell the story of these brave young men. Like this account of one of the pilots training flight back in Australia: "One damn bump after another. Tried some forced landings to such a reckless extent the poor old instructor couldn't say a word. I damn near hit a fence about 20 times."

And this account from the period known as the ‘Phoney War’ in France in 1939: "His fellow Australian Flying Officer Johnny Cock overshot the landing strip on one occasion and ended up in a reservoir. On another, Flying Officer Roderick 'Roddy' Rayner landed with his wheels still retracted. His excuse? 'Just forgot them, old boy.' As Flight Lieutenant Ian 'Widge' Gleed recalled it, 'life was rosy' during the Phoney War."

This incident occurred during the early stages of the Battle of Britain and it brought a smile to my face, although I wondered if Sergeant Badger was smiling at the time: "Dick returned from battle uninjured, but his Hurricane was not so lucky; it was pocked with bullet holes. At least one other Hurricane was holed as well: such was the confusion in the air Dick had mistaken Sergeant Ivor Badger's Hurricane for an enemy aircraft. With a broad grin, Badger later declared to Dick, 'You are a rotten shot, sir!' "

I have read many good books on the Battle of Britain and this new title ranks up there with the best. Although this book is written about the life and death of Australians who flew during the Battle of Britain, anyone who has an interest in the RAF, RAAF or this battle will enjoy this book. It shows the progression of keen young men full of life and energy being worn down by constant missions and combat against the Luftwaffe till they paid the ultimate price.

The stories of those they left behind; friends, lovers, wives and family is also well told and the book continues past the end of the battle to the years after the war and how these men were remembered and commemorated. Overall this is a book every Australian, or anyone who has an interest in this period should read. It is about what these young men gave in the service of their country and to defend England at a time of dire need.

Although I felt sad every time I read of the death of one of these brave young men I am glad I read this book. I think we all needed to be reminded at times that history is more than dates and places, it is about what others have given for the benefit of all.

In closing here is something that one of these young pilots, Pat Hughes, wrote as a school boy back in Australia that resonated with his death, titled AN AUTUMN EVENING:

“The cool evening wind came whispering over the lonely land … The watcher rose slowly to his feet, and with the beauty of that autumn evening impressed on his soul, he started again on his journey. For a moment he was lost to view behind an outcrop, but then for a short time he stood, vaguely outlined against the lighter gloom of a wide-arched sky – and then he passed from sight – over the skyline.” 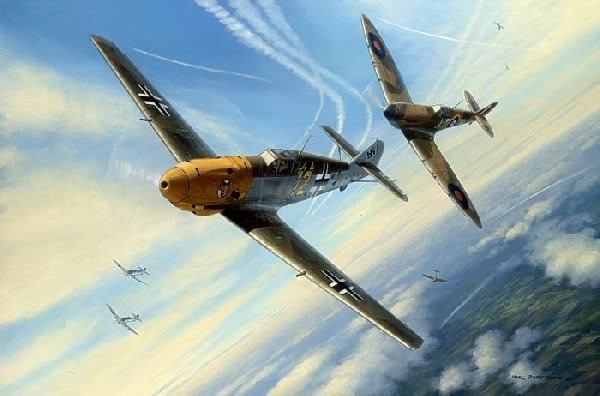 Sign into Goodreads to see if any of your friends have read Australia’s Few and the Battle of Britain.
Sign In »

Johnny Cock? He probably flew into the reservoir on purpose!