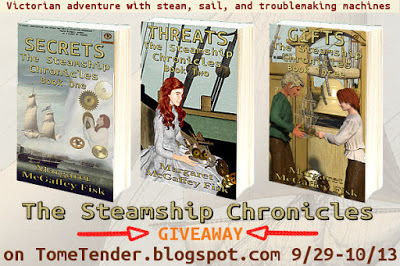 Enter to win ONE of THREE eCopies of THREATS
or
ONE eCopy of the FULL Volume - SECRETS-THREATS-GIFTS
International where allowed - Ends October 13, 2015
Click on Banner to enter!

Attention Steampunk fans! Want to be able to talk books with the kids? Thanks to the magic of Margaret McGaffey Fisk’s delightful Secrets, here is a book that can be read and enjoyed by ALL ages. Imagine being able to read the “hearts” of mechanical devices, and to be able to change them into what they really want to be! Has it ever occurred to you that a simple toy might want to be more? What about a vehicle? The possibilities are endless! Too bad “naturals,” as they are called are considered a threat to Victorian England’s sensibilities, those poor rich people who can afford devices may find their purchases have a mind of their own, especially when young Sam gets her hands on them.

Sent away for her own safety, from the start, her journey across the ocean is doomed from the very start and she bravely determines she WILL find a way to travel aboard a less than spectacular ship, she will stowaway, but the call of the steam engines is threatening to get her captured.

Young Nathaniel comes from money, has book smarts, but no real life experiences, so he is taken on as a novice worker aboard an old and poorly running ship. Nat dreams of one day having his own ship to captain, but resentment of his status makes him an unlikely success. He discovers Sam and thus begins their adventure upon the waters!

Margaret McGaffey Fisk has caught the flavor of “steampunk” and Victorian England perfectly, while maintaining a fast pace filled with the energy of youth! Easy to read, each scene in her world ran like a movie in my head. The chaos of the docks, the smells, the sounds, I swear I could have gotten a splinter from the wooden planks. Both main characters have the insecurity of youth, yet the determination to go the distance, wherever that may take them. Add in some quirky or nasty supporting characters and the trip into the past, across the veil of an alternate history is complete.

Secrets is definitely one of those shiny gems in the world of books with its sense of adventure, fear of the unknown and, hey, it’s steampunk, need I say more?

I was very fortunate to receive a review copy from the author in exchange for my honest review. 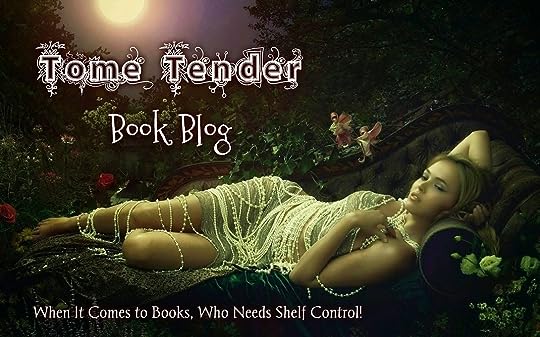