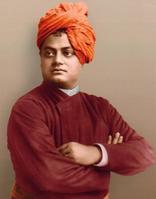 “The Christian is not to become a Hindu or a Buddhist, nor is a Hindu or a Buddhist to become a Christian. But each must assimilate the spirit of the others and yet preserve his individuality and grow according to his own law of growth. If the Parliament of Religions has shown anything to the world, it is this: It has proved to the world that holiness, purity, and charity are not the exclusive possessions of any church in the world, and that every system has produced men and women of the most exalted character. In the face of this evidence, if anybody dreams of the exclusive survival of his own religion at the expense of the others, I pity him from the bottom of my heart and point out to him that upon the banner of every religion will soon be written, in spite of resistance: "Help and not Fight," "Assimilation and not Destruction," "Harmony and Peace and not Dissension".”