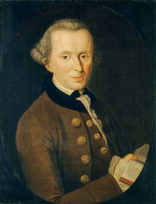 “All rational knowledge is either material, and concerns some objects, or formal, and is occupied only with the form of understanding and reason itself and with the universal rules of thinking, without regard to distinctions among objects.

formal philosophy is called logic. Material philosophy, however, which has to do with definite object objects and the laws to which they are subject, is divided into two parts. This is because these laws are either laws of nature or laws of freedom. The science of the former is called physics, and that of the latter ethics. The former is also called theory of nature and the latter theory of morals.”