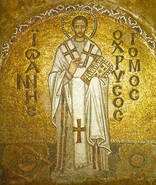 “Let no one bewail his poverty,
For the universal Kingdom has been revealed.
Let no one weep for his iniquities,
For pardon has shown forth from the grave.
Let no one fear death,
For the Saviour's death has set us free.
He that was held prisoner of it has annihilated it.

By descending into Hell, He made Hell captive.
He embittered it when it tasted of His flesh.
And Isaiah, foretelling this, did cry:
Hell, said he, was embittered
When it encountered Thee in the lower regions.

32 likes
All Members Who Liked This Quote