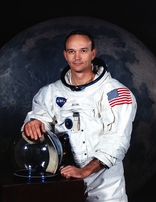 “I really believe that if the political leaders of the world could see their planet from a distance of, let's say 100,000 miles, their outlook would be fundamentally changed. The all-important border would be invisible, that noisy argument suddenly silenced. The tiny globe would continue to turn, serenely ignoring its subdivisions, presenting a unified facade that would cry out for unified understanding, for homogeneous treatment. The earth must become as it appears: blue and white, not capitalist or communist; blue and white, not rich or poor; blue and white, not envious or envied.”