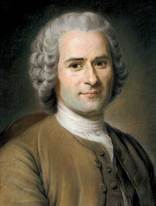 “With regard to equality, this word must not be understood to mean that degress of power and wealth should be exactly the same, but rather that with regard to power, it should be incapable of all violence and never exerted except by virtue of status and the laws; and with regard to wealth, no citizen should be so opulent that he can buy another, and none so poor that he is constrained to sell himself.”