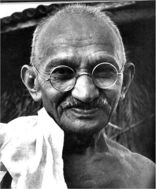 “Reader: Will you not admit that you are arguing against yourself? You know that what the English obtained in their own country they obtained by using brute force. I know you have argued that what they have obtained is useless, but that does not affect my argument. They wanted useless things and they got them. My point is that their desire was fulfilled. What does it matter what means they adopted? Why should we not obtain our goal, which is good, by any means whatsoever, even by using violence? Shall I think of the means when I have to deal with a thief in the house? My duty is to drive him out anyhow. You seem to admit that we have received nothing, and that we shall receive nothing by petitioning. Why, then, may we do not so by using brute force? And, to retain what we may receive we shall keep up the fear by using the same force to the extent that it may be necessary. You will not find fault with a continuance of force to prevent a child from thrusting its foot into fire. Somehow or other we have to gain our end.

Editor: Your reasoning is plausible. It has deluded many. I have used similar arguments before now. But I think I know better now, and I shall endeavour to undeceive you. Let us first take the argument that we are justified in gaining our end by using brute force because the English gained theirs by using similar means. It is perfectly true that they used brute force and that it is possible for us to do likewise, but by using similar means we can get only the same thing that they got. You will admit that we do not want that. Your belief that there is no connection between the means and the end is a great mistake. Through that mistake even men who have been considered religious have committed grievous crimes. Your reasoning is the same as saying that we can get a rose through planting a noxious weed. If I want to cross the ocean, I can do so only by means of a vessel; if I were to use a cart for that purpose, both the cart and I would soon find the bottom. "As is the God, so is the votary", is a maxim worth considering. Its meaning has been distorted and men have gone astray. The means may be likened to a seed, the end to a tree; and there is just the same inviolable connection between the means and the end as there is between the seed and the tree. I am not likely to obtain the result flowing from the worship of God by laying myself prostrate before Satan. If, therefore, anyone were to say : "I want to worship God; it does not matter that I do so by means of Satan," it would be set down as ignorant folly. We reap exactly as we sow. The English in 1833 obtained greater voting power by violence. Did they by using brute force better appreciate their duty? They wanted the right of voting, which they obtained by using physical force. But real rights are a result of performance of duty; these rights they have not obtained. We, therefore, have before us in English the force of everybody wanting and insisting on his rights, nobody thinking of his duty. And, where everybody wants rights, who shall give them to whom? I do not wish to imply that they do no duties. They don't perform the duties corresponding to those rights; and as they do not perform that particular duty, namely, acquire fitness, their rights have proved a burden to them. In other words, what they have obtained is an exact result of the means they adapted. They used the means corresponding to the end. If I want to deprive you of your watch, I shall certainly have to fight for it; if I want to buy your watch, I shall have to pay you for it; and if I want a gift, I shall have to plead for it; and, according to the means I employ, the watch is stolen property, my own property, or a donation. Thus we see three different results from three different means. Will you still say that means do not matter?”