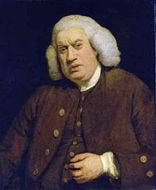 “To be of no church is dangerous. Religion, of which the rewards are distant, and which is animated only by faith and hope, will glide by degrees out of the mind unless it be invigorated and reimpressed by external ordinances, by stated calls to worship, and the salutary influence of example.”