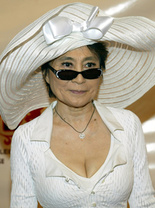 “I think that all women are witches, in the sense that a witch is a magical being. And a wizard, which is a male version of a witch, is kind of revered, and people respect wizards. But a witch, my god, we have to burn them. It’s the male chauvinistic society that we’re living in for the longest time, 3,000 years or whatever. And so I just wanted to point out the fact that men and women are magical beings. We are very blessed that way, so I’m just bringing that out. Don’t be scared of witches, because we are good witches, and you should appreciate our magical power.”

58 likes
All Members Who Liked This Quote