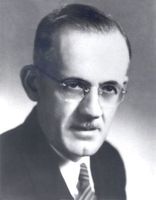 “To square the records, however, it should be said that if the Calvinist does not rise as high, he usually stays up longer. He places more emphasis on the Holy Scriptures which never change, while his opposite number (as the newspapers say) tends to judge his spiritual condition by the state of his feelings, which change constantly. This may be the reason that so many Calvinistic churches remain orthodox for centuries, at least in doctrine, while many churches of the Arminian persuasion often go liberal in one generation.”