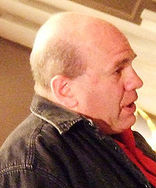 “If the case isn't plea bargained, dismissed or placed on the inactive docket for an indefinite period of time, if by some perverse twist of fate it becomes a trial by jury, you will then have the opportunity of sitting on the witness stand and reciting under oath the facts of the case-a brief moment in the sun that clouds over with the appearance of the aforementioned defense attorney who, at worst, will accuse you of perjuring yourself in a gross injustice or, at best, accuse you of conducting an investigation so incredibly slipshod that the real killer has been allowed to roam free.
Once both sides have argued the facts of the case, a jury of twelve men and women picked from computer lists of registered voters in one of America's most undereducated cities will go to a room and begin shouting. If these happy people manage to overcome the natural impulse to avoid any act of collective judgement, they just may find one human being guilty of murdering another. Then you can go to Cher's Pub at Lexington and Guilford, where that selfsame assistant state's attorney, if possessed of any human qualities at all, will buy you a bottle of domestic beer.
And you drink it. Because in a police department of about three thousand sworn souls, you are one of thirty-six investigators entrusted with the pursuit of that most extraordinary of crimes: the theft of a human life. You speak for the dead. You avenge those lost to the world. Your paycheck may come from fiscal services but, goddammit, after six beers you can pretty much convince yourself that you work for the Lord himself. If you are not as good as you should be, you'll be gone within a year or two, transferred to fugitive, or auto theft or check and fraud at the other end of the hall. If you are good enough, you will never do anything else as a cop that matters this much. Homicide is the major leagues, the center ring, the show. It always has been. When Cain threw a cap into Abel, you don't think The Big Guy told a couple of fresh uniforms to go down and work up the prosecution report. Hell no, he sent for a fucking detective. And it will always be that way, because the homicide unit of any urban police force has for generations been the natural habitat of that rarefied species, the thinking cop.”