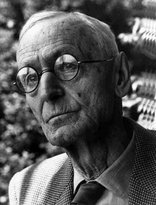 “Was it not his Self, his small, fearful and proud Self, with which he had wrestled for so many years, but which had always conquered him again, which appeared each time again and again, which robbed him of happiness and filled him with fear?”