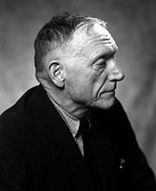 “Season late, day late, sun just down, and the sky
Cold gunmetal but with a wash of live rose, and she,
From water the color of sky except where
Her motion has fractured it to shivering splinters of silver,
Rises. Stands on the raw grass. Against
The new-curdling night of spruces, nakedness
Glimmers and, at bosom and flank, drips
With fluent silver. The man,

Some ten strokes out, but now hanging
Motionless in the gunmetal water, feet
Cold with the coldness of depth, all
History dissolving from him, is
Nothing but an eye. Is an eye only. Sees

The body that is marked by his use, and Time's,
Rise, and in the abrupt and unsustaining element of air,
Sway, lean, grapple the pond-bank. Sees
How, with that posture of female awkwardness that is,
And is the stab of, suddenly perceived grace, breasts bulge down in
The pure curve of their weight and buttocks
Moon up and, in swelling unity,
Are silver and glimmer. Then

The body is erect, she is herself, whatever
Self she may be, and with an end of the towel grasped in each hand,
Slowly draws it back and forth across back and buttocks, but
With face lifted toward the high sky, where
The over-wash of rose color now fails. Fails, though no star
Yet throbs there. The towel, forgotten,
Does not move now. The gaze
Remains fixed on the sky. The body,

Profiled against the darkness of spruces, seems
To draw to itself, and condense in its whiteness, what light
In the sky yet lingers or, from
The metallic and abstract severity of water, lifts. The body,
With the towel now trailing loose from one hand, is
A white stalk from which the face flowers gravely toward the high sky.
This moment is non-sequential and absolute, and admits
Of no definition, for it
Subsumes all other, and sequential, moments, by which
Definition might be possible. The woman,

Face yet raised, wraps,
With a motion as though standing in sleep,
The towel about her body, under her breasts, and,
Holding it there hieratic as lost Egypt and erect,
Moves up the path that, stair-steep, winds
Into the clamber and tangle of growth. Beyond
The lattice of dusk-dripping leaves, whiteness
Dimly glimmers, goes. Glimmers and is gone, and the man,

Suspended in his darkling medium, stares
Upward where, though not visible, he knows
She moves, and in his heart he cries out that, if only
He had such strength, he would put his hand forth
And maintain it over her to guard, in all
Her out-goings and in-comings, from whatever
Inclemency of sky or slur of the world's weather
Might ever be. In his heart he cries out. Above

Height of the spruce-night and heave of the far mountain, he sees
The first star pulse into being. It gleams there.

I do not know what promise it makes him. ”