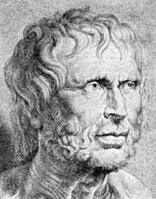 “For it is dangerous to attach one's self to the crowd in front, and so long as each one of us is more willing to trust another than to judge for himself, we never show any judgement in the matter of living, but always a blind trust, and a mistake that has been passed on from hand to hand finally involves us and works our destruction. It is the example of other people that is our undoing; let us merely separate ourselves from the crowd, and we shall be made whole. But as it is, the populace,, defending its own iniquity, pits itself against reason. And so we see the same thing happening that happens at the elections, where, when the fickle breeze of popular favour has shifted, the very same persons who chose the praetors wonder that those praetors were chosen.”

41 likes
All Members Who Liked This Quote