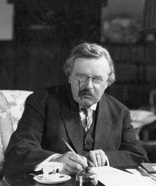 “A child's instinct is almost perfect in the matter of fighting; a child always stands for the good militarism as against the bad. The child's hero is always the man or boy who defends himself suddenly and splendidly against aggression. The child's hero is never the man or boy who attempts by his mere personal force to extend his mere personal influence. In all boys' books, in all boys' conversation, the hero is one person and the bully the other. That combination of the hero and bully in one, which people now call the Strong Man or the Superman, would be simply unintelligible to any schoolboy....

But really to talk of this small human creature, who never picks up an umbrella without trying to use it as a sword, who will hardly read a book in which there is no fighting, who out of the Bible itself generally remembers the "bluggy" [bloody] parts, who never walks down the garden without imagining himself to be stuck all over with swords and daggers--to take this human creature and talk about the wickedness of teaching him to be military, seems rather a wild piece of humour. He has already not only the tradition of fighting, but a far manlier and more genial tradition of fighting than our own. No; I am not in favour of the child being taught militarism. I am in favour of the child teaching it.”

37 likes
All Members Who Liked This Quote