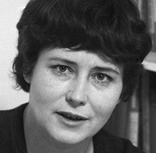 “Ms. Lessing points to a current dogma: political correctness. "It's a continuation of the old Communist Party. It is! The same words, the same attitudes... 'the Communist Party has made a decision and this is the line."

At first, she says, political correctness had a good beginning; she remembers saying that the language that we use is sexist, racist and so on. But then, "that became a dogma. Because we love a dogma,you know, we really do. We can never just let things develop easily from an idea, it seems to me there's always a group of fanatics who grasp it and make it a dogma.”