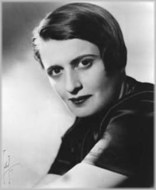 “The greatest guilt of today is that of people who accept collectivism by moral default; the people who seek protection from the necessity of taking a stand, by refusing to admit to themselves the nature of that which they are accepting; the people who support plans specifically designed to achieve serfdom, but hide behind the empty assertion that they are lovers of freedom, with no concrete meaning attached to the word; the people who believe that the content of ideas need not be examined, that principles need not be defined, and that facts can be eliminated by keeping one's eyes shut. They expect, when they find themselves in a world of bloody ruins and concentration camps, to escape moral responsibility by wailing: "But I didn't mean this!”

82 likes
All Members Who Liked This Quote