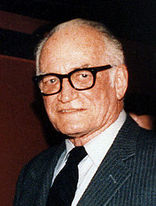 “Those who seek absolute power, even though they seek it to do what they regard as good, are simply demanding the right to enforce their own version of heaven on earth. And let me remind you, they are the very ones who always create the most hellish tyrannies. Absolute power does corrupt, and those who seek it must be suspect and must be opposed. Their mistaken course stems from false notions of equality, ladies and gentlemen. Equality, rightly understood, as our founding fathers understood it, leads to liberty and to the emancipation of creative differences. Wrongly understood, as it has been so tragically in our time, it leads first to conformity and then to despotism. Fellow Republicans, it is the cause of Republicanism to resist concentrations of power, private or public, which enforce such conformity and inflict such despotism. It is the cause of Republicanism to ensure that power remains in the hands of the people. ”

46 likes
All Members Who Liked This Quote