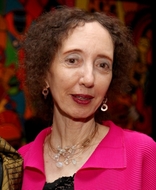 “When you discover yourself lying on the ground, limp and unresisting, head in the dirt, and helpless, the earth seems to shift forward as a presence; hard, emphatic, not mere surface but a genuine force—there is no other word for it but presence. To keep in motion is to keep in time and to be stopped, stilled, is to be abruptly out of time, in another time-dimension perhaps, an alien one, where human language has no resonance. Nothing to be said about it expresses it, nothing touches it, it’s an absolute against which nothing human can be measured…Moving through space and time by way of your own volition you inhabit an interior consciousness, a hallucinatory consciousness, it might be said, so long as breath, heartbeat, the body’s autonomy hold; when motion is stopped you are jarred out of it. The interior is invaded by the exterior. The outside wants to come in, and only the self’s fragile membrane prevents it.”