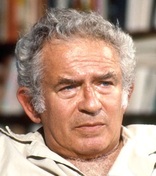 “On the other hand, I am not a liberal. The notion that man is a rational creature who arrives at reasonable solutions to knotty problems is much in doubt as far as I’m concerned. Liberalism depends all too much on having an optimistic view of human nature. But the history of the 20th century has not exactly fortified that notion. Moreover, liberalism also depends too much upon reason rather than any appreciation of mystery. If you start to talk about God with the average good liberal, he looks at you as if you are more than a little off. In that sense, since I happen to be—I hate to use the word religious, there are so many heavy dull connotations, so many pious self-seeking aspects—but I do believe there is a Creator who is active in human affairs and is endangered. I also believe there is a Devil who is equally active in our existence (and is all too often successful). So, I can hardly be a liberal. God is bad enough for them, but talk about the devil, and the liberal’s mind is blown. He is consorting with a fellow who is irrational if not insane. That is the end of real conversation.”