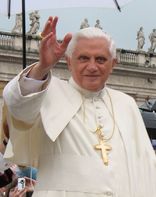 “The theology of littleness is a basic category of Christianity. After all, the tenor of our faith is that God's distinctive greatness is revealed precisely in powerlessness. That in the long run, the strength of history is precisely in those who love, which is to say, in a strength that, properly speaking, cannot be measured according to categories of power. So in order to show who he is, God consciously revealed himself in the powerlessness of Nazareth and Golgotha. Thus, it is not the one who can destroy the most who is the most powerful...but, on the contrary, the least power of love is already greater than the greatest power of destruction.”