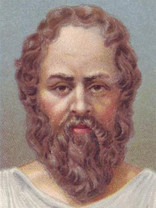 “I examined the poets, and I look on them as people whose talent overawes both themselves and others, people who present themselves as wise men and are taken as such, when they are nothing of the sort.

We do not know — neither the sophists, nor the orators, nor the artists, nor I— what the True, the Good, and the Beautiful are. But there is this difference between us: although these people know nothing, they all believe they know something; whereas, I, if I know nothing, at least have no doubts about it. As a result, all this superiority in wisdom which the oracle has attributed to me reduces itself to the single point that I am strongly convinced that I am ignorant of what I do not know.”

432 likes
All Members Who Liked This Quote