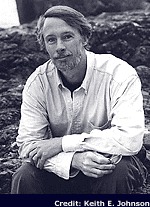 “She'd like to say something about the metaphors of space. She won't, but she'd like to. In many religions, the sun is viewed as an analogue to God, and in some Near Eastern cults, the fire cults that interested Nietzsche, the sun is a diety, the origin of all energy, heat, light, and life. A masculine force, this sun, countered by the feminine lucent moon, mutable, pale pink at the horizon, grayish white overhead, and silver in daytime. The moon is a friend to women. Its attraction, its capacity to pull objects toward itself, is traditionally a metaphor for womanly force. Lovers know and understand the moon as a sign for love: a cliché, certainly, but one that does not wear out. "The Moon," they whisper, infinitely.”