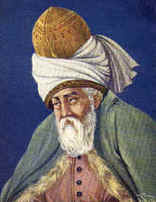 “I searched for God among the Christians and on the Cross and therein I found Him not.
I went into the ancient temples of idolatry; no trace of Him was there.
I entered the mountain cave of Hira and then went as far as Qandhar but God I found not.
With set purpose I fared to the summit of Mount Caucasus and found there only 'anqa's habitation.
Then I directed my search to the Kaaba, the resort of old and young; God was not there even.
Turning to philosophy I inquired about him from ibn Sina but found Him not within his range.
I fared then to the scene of the Prophet's experience of a great divine manifestation only a "two bow-lengths' distance from him" but God was not there even in that exalted court.
Finally, I looked into my own heart and there I saw Him; He was nowhere else.”

320 likes
All Members Who Liked This Quote