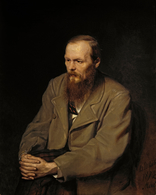 “It sometimes happened that you might be familiar with a man for several years thinking he was a wild animal, and you would regard him with contempt. And then suddenly a moment would arrive when some uncontrollable impulse would lay his soul bare, and you would behold in it such riches, such sensitivity and warmth, such a vivid awareness of its own suffering and the suffering of others, that the scales would fall from your eyes and at first you would hardly be able to believe what you had seen and heard. The reverse also happens.”