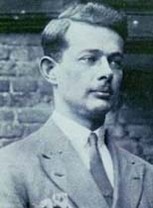 “In the castle of Benwick, the French boy was looking at his face in the polished surface of a kettle-hat. It flashed in the sunlight with the stubborn gleam of metal. It was practically the same as the steel helmet which soldiers still wear, and it did not make a good mirror, but it was the best he could get. He turned the hat in various directions, hoping to get an average idea of his face from the different distoritons which the bulges made. He was trying to find out what he was, and he was afraid of what he would find.

The boy thought that there was something wrong with him. All through his life--even when he was a great man with the world at his feet--he was to feel this gap: something at the bototm of his heart of which he was aware, and ashamed, but which he did not understand. There is no need for us to try to understand it. We do not have to dabble in a place which he preferred to keep secret.”