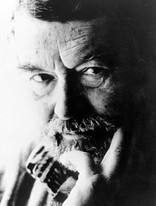 “He makes me change, he makes me want to dance round him, bewilder him, dazzle him, dumbfound him. He' so slow, so unimaginative, so lifeless. Like zinc white. I see it's a sort of tyranny he has over me. He forces me to be changeable, to act. To show off. The hateful tyranny of weak people.

The ordinary man is the curse of civilization.”