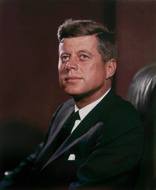 “I believe in an America where the separation of church and state is absolute - where no Catholic prelate would tell the President (should he be Catholic) how to act, and no Protestant minister would tell his parishioners for whom to vote - where no church or church school is granted any public funds or political preference - and where no man is denied public office merely because his religion differs from the President who might appoint him or the people who might elect him.

I believe in an America that is officially neither Catholic, Protestant nor Jewish - where no public official either requests or accepts instructions on public policy from the Pope, the National Council of Churches or any other ecclesiastical source - where no religious body seeks to impose its will directly or indirectly upon the general populace or the public acts of its officials - and where religious liberty is so indivisible that an act against one church is treated as an act against all.

168 likes
All Members Who Liked This Quote