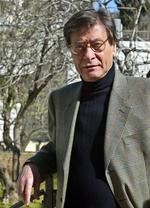 “The boy went back to his family there, in the distance, in a distance he did not find there in the distance. My grandfather died counting sunsets, seasons, and heartbeats on the fingers of his withered hands. He dropped like a fruit forbidden a branch to lean its age against. They destroyed his heart. He wearied of waiting here, in Damur. He said goodbye to friends, water pipe, and children and took me and went back to find what was no longer his to find there. Here the number of aliens increased, and refugee camps got bigger. A war went by, then two, three, and four. The homeland got farther and farther away, and the children got farther and farther from mother's milk after they had tasted the milk of UNRWA. So they bought guns to get closer to a homeland flying out of their reach. They brought their identity back into being, re-created the homeland, and followed their path, only to have it blocked by the guardians of civil wars. They defended their steps, but then path parted from path, the orphan lived in the skin of the orphan, and one refugee camp went into another. ”