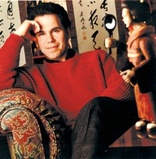 “We human beings are only a part of something very much larger. When we walk along, we may crush a beetle or simply cause a change in the air so that a fly ends up where it might never have gone otherwise. And if we think of the same example but with ourselves in the role of the insect, and the larger universe in the role we've just played, it's perfectly clear that we're affected every day by forces over which we have no more control than the poor beetle has over our gigantic foot as it descends upon it. What are we to do? We must use whatever methods we can to understand the movement of the universe around us and time our actions so that we are not fighting the currents, but moving with them.”

52 likes
All Members Who Liked This Quote