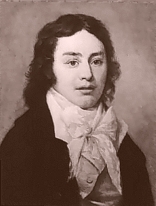 “The intelligible forms of ancient poets,
The fair humanities of old religion,
The Power, the Beauty, and the Majesty
That had their haunts in dale or piny mountain,
Or forest, by slow stream, or pebbly spring,
Or chasms and watery depths; all these have vanished;
They live no longer in the faith of reason;
But still the heart doth need a language; still
Doth the old instinct bring back the old names;
Spirits or gods that used to share this earth
With man as with their friend; and at this day
'Tis Jupiter who brings whate'er is great,
And Venus who brings every thing that's fair.”