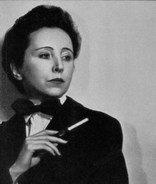 “There were always in me, two women at least, one woman desperate and bewildered, who felt she was drowning and another who would leap into a scene, as upon a stage, conceal her true emotions because they were weaknesses, helplessness, despair, and present to the world only a smile, an eagerness, curiosity, enthusiasm, interest.”

2318 likes
All Members Who Liked This Quote