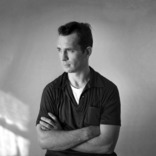 “The Beat Generation, that was a vision that we had, John Clellon Holmes and I, and Allen Ginsberg in an even wilder way, in the late forties, of a generation of crazy, illuminated hipsters suddenly rising and roaming America, serious, bumming and hitchhiking everywhere, ragged, beatific, beautiful in an ugly graceful new way--a vision gleaned from the way we had heard the word 'beat' spoken on streetcorners on Times Square and in the Village, in other cities in the downtown city night of postwar America--beat, meaning down and out but full of intense conviction--We'd even heard old 1910 Daddy Hipsters of the streets speak the word that way, with a melancholy sneer--It never meant juvenile delinquents, it meant characters of a special spirituality who didn't gang up but were solitary Bartlebies staring out the dead wall window of our civilization--the subterraneans heroes who'd finally turned from the 'freedom' machine of the West and were taking drugs, digging bop, having flashes of insight, experiencing the 'derangement of the senses,' talking strange, being poor and glad, prophesying a new style for American culture, a new style (we thought), a new incantation--The same thing was almost going on in the postwar France of Sartre and Genet and what's more we knew about it--But as to the actual existence of a Beat Generation, chances are it was really just an idea in our minds--We'd stay up 24 hours drinking cup after cup of black coffee, playing record after record of Wardell Gray, Lester Young, Dexter Gordon, Willie Jackson, Lennie Tristano and all the rest, talking madly about that holy new feeling out there in the streets- -We'd write stories about some strange beatific Negro hepcat saint with goatee hitchhiking across Iowa with taped up horn bringing the secret message of blowing to other coasts, other cities, like a veritable Walter the Penniless leading an invisible First Crusade- -We had our mystic heroes and wrote, nay sung novels about them, erected long poems celebrating the new 'angels' of the American underground--In actuality there was only a handful of real hip swinging cats and what there was vanished mightily swiftly during the Korean War when (and after) a sinister new kind of efficiency appeared in America, maybe it was the result of the universalization of Television and nothing else (the Polite Total Police Control of Dragnet's 'peace' officers) but the beat characters after 1950 vanished into jails and madhouses, or were shamed into silent conformity, the generation itself was shortlived and small in number.”

107 likes
All Members Who Liked This Quote