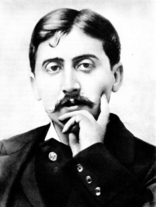 “A few hours later, Françoise was able for the last time, and without causing pain, to comb that beautiful hair, which was only slightly graying and had thus far seemed much younger than my grandmother herself. But this was now reversed: the hair was the only feature to set the crown of age on a face grown young again, free of the wrinkles, the shrinkage, the puffiness, the tensions, the sagging flesh which pain had brought to it for so long. As in the distant days when her parents had chosen a husband for her, her features were delicately traced by purity and submission, her cheeks glowed with a chaste expectation, a dream of happiness, an innocent gaiety even, which the years had gradually destroyed. As it ebbed from her, life had borne away its disillusions. A smile seemed to hover on my grandmother’s lips. On that funeral couch, death, like a sculptor of the Middle Ages, had laid her to rest with the face of a young girl.”