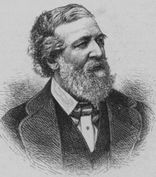 “XII.
If there pushed any ragged thistle-stalk
Above its mates, the head was chopped, the bents
Were jealous else. What made those holes and rents
In the dock's harsh swarth leaves, bruised as to baulk
All hope of greenness? Tis a brute must walk
Pashing their life out, with a brute's intents.

XIII.
As for the grass, it grew as scant as hair
In leprosy; thin dry blades pricked the mud
Which underneath looked kneaded up with blood.
One stiff blind horse, his every bone a-stare,
Stood stupified, however he came there:
Thrust out past service from the devil's stud!

XIV.
Alive? he might be dead for aught I knew,
With that red gaunt and colloped neck a-strain.
And shut eyes underneath the rusty mane;
Seldom went such grotesqueness with such woe;
I never saw a brute I hated so;
He must be wicked to deserve such pain.

XV.
I shut my eyes and turned them on my heart,
As a man calls for wine before he fights,
I asked one draught of earlier, happier sights,
Ere fitly I could hope to play my part.
Think first, fight afterwards, the soldier's art:
One taste of the old time sets all to rights.

XVI.
Not it! I fancied Cuthbert's reddening face
Beneath its garniture of curly gold,
Dear fellow, till I almost felt him fold
An arm to mine to fix me to the place,
The way he used. Alas, one night's disgrace!
Out went my heart's new fire and left it cold.

XVII.
Giles then, the soul of honour - there he stands
Frank as ten years ago when knighted first,
What honest man should dare (he said) he durst.
Good - but the scene shifts - faugh! what hangman hands
Pin to his breast a parchment? His own bands
Read it. Poor traitor, spit upon and curst!

XVIII.
Better this present than a past like that:
Back therefore to my darkening path again!
No sound, no sight as far as eye could strain.
Will the night send a howlet or a bat?
I asked: when something on the dismal flat
Came to arrest my thoughts and change their train.

XIX.
A sudden little river crossed my path
As unexpected as a serpent comes.
No sluggish tide congenial to the glooms;
This, as it frothed by, might have been a bath
For the fiend's glowing hoof - to see the wrath
Of its black eddy bespate with flakes and spumes.

XX.
So petty yet so spiteful! All along,
Low scrubby alders kneeled down over it;
Drenched willows flung them headlong in a fit
Of mute despair, a suicidal throng:
The river which had done them all the wrong,
Whate'er that was, rolled by, deterred no whit.

XXI.
Which, while I forded - good saints, how I feared
To set my foot upon a dead man's cheek,
Each step, of feel the spear I thrust to seek
For hollows, tangled in his hair or beard!
- It may have been a water-rat I speared,
But, ugh! it sounded like a baby's shriek.

XXII.
Glad was I when I reached the other bank.
Now for a better country. Vain presage!
Who were the strugglers, what war did they wage,
Whose savage trample thus could pad the dank
soil to a plash? Toads in a poisoned tank
Or wild cats in a red-hot iron cage -

XXIII.
The fight must so have seemed in that fell cirque,
What penned them there, with all the plain to choose?
No footprint leading to that horrid mews,
None out of it. Mad brewage set to work
Their brains, no doubt, like galley-slaves the Turk
Pits for his pastime, Christians against Jews. ”