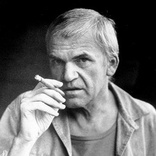 “Early in the novel that Tereza clutched under her arm when she went to visit Tomas, Anna meets Vronsky in curious circumstances: they are at the railway station when someone is run over by a train. At the end of the novel, Anna throws herself under a train. This symmetrical composition - the same motif appears at the beginning and at the end - may seem quite "novelistic" to you, and I am willing to agree, but only on condition that you refrain from reading such notions as "fictive," "fabricated," and "untrue to life" into the word "novelistic." Because human lives are composed in precisely such a fashion.

They are composed like music. Guided by his sense of beauty, an individual transforms a fortuitous occurrence (Beethoven's music, death under a train) into a motif, which then assumes a permanent place in the composition of the individual's life. Anna could have chosen another way to take her life. But the motif of death and the railway station, unforgettably bound to the birth of love, enticed her in her hour of despair with its dark beauty. Without realizing it, the individual composes his life according to the laws of beauty even in times of greatest distress.

It is wrong, then, to chide the novel for being fascinated by mysterious coincidences (like the meeting of Anna, Vronsky, the railway station, and death or the meeting of Beethoven, Tomas, Tereza, and the cognac), but it is right to chide man for being blind to such coincidences in his daily life. For he thereby deprives his life of a dimension of beauty.”