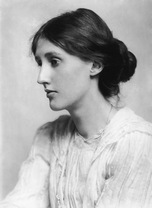 “She looked now at the drawing-room step. She saw, through William’s eyes, the shape of a woman, peaceful and silent, with downcast eyes. She sat musing, pondering (she was in grey that day, Lily thought). Her eyes were bent. She would never lift them. . . . [N]o, she thought, one could say nothing to nobody. The urgency of the moment always missed its mark. Words fluttered sideways and struck the object inches too low. Then one gave it up; then the idea sunk back again; then one became like most middle-aged people, cautious, furtive, with wrinkles between the eyes and a look of perpetual apprehension. For how could one express in words these emotions of the body? Express that emptiness there? (She was looking at the drawing-room steps; they looked extraordinarily empty.) It was one’s body feeling, not one’s mind. The physical sensations that went with the bare look of the steps had become suddenly extremely unpleasant. To want and not to have, sent all up her body a hardness, a hollowness, a strain. And then to want and not to have – to want and want – how that wrung the heart, and wrung again and again! Oh, Mrs. Ramsay! she called out silently, to that essence which sat by the boat, that abstract one made of her, that woman in grey, as if to abuse her for having gone, and then having gone, come back again. It had seemed so safe, thinking of her. Ghost, air, nothingness, a thing you could play with easily and safely at any time of day or night, she had been that, and then suddenly she put her hand out and wrung the heart thus. Suddenly, the empty drawing-room steps, the frill of the chair inside, the puppy tumbling on the terrace, the whole wave and whisper of the garden became like curves and arabesques flourishing round a centre of complete emptiness. . . . A curious notion came to her that he did after all hear the things she could not say. . . . She looked at her picture. That would have been his answer, presumably – how “you” and “I” and “she” pass and vanish; nothing stays; all changes; but not words, not paint. Yet it would be hung in the attics, she thought; it would be rolled up and flung under a sofa; yet even so, even of a picture like that, it was true. One might say, even of this scrawl, not of that actual picture, perhaps, but of what it attempted, that it “remained for ever,” she was going to say, or, for the words spoken sounded even to herself, too boastful, to hint, wordlessly; when, looking at the picture, she was surprised to find that she could not see it. Her eyes were full of a hot liquid (she did not think of tears at first) which, without disturbing the firmness of her lips, made the air thick, rolled down her cheeks. She had perfect control of herself – Oh, yes! – in every other way. Was she crying then for Mrs. Ramsay, without being aware of any unhappiness? She addressed old Mr. Carmichael again. What was it then? What did it mean? Could things thrust their hands up and grip one; could the blade cut; the fist grasp? Was there no safety? No learning by heart of the ways of the world? No guide, no shelter, but all was miracle, and leaping from the pinnacle of a tower into the air? Could it be, even for elderly people, that this was life? – startling, unexpected, unknown? For one moment she felt that if they both got up, here, now on the lawn, and demanded an explanation, why was it so short, why was it so inexplicable, said it with violence, as two fully equipped human beings from whom nothing should be hid might speak, then, beauty would roll itself up; the space would fill; those empty flourishes would form into shape; if they shouted loud enough Mrs. Ramsay would return. “Mrs. Ramsay!” she said aloud, “Mrs. Ramsay!” The tears ran down her face.”