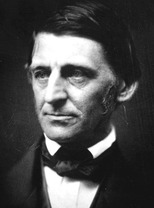 “Prayer that craves a particular commodity, -- anything less than all good, -- is vicious. Prayer is the contemplation of the facts of life from the highest point of view. It is the soliloquy of a beholding and jubilant soul. It is the spirit of God pronouncing his works good. But prayer as a means to effect a private end is meanness and theft. It supposes dualism and not unity in nature and consciousness. As soon as the man is at one with God, he will not beg. He will then see prayer in all action. The prayer of the farmer kneeling in his field to weed it, the prayer of the rower kneeling with the stroke of his oar, are true prayers heard throughout nature, though for cheap ends.”