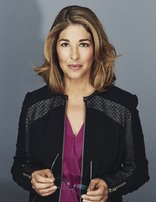 “A term like capitalism is incredibly slippery, because there's such a range of different kinds of market economies. Essentially, what we've been debating over—certainly since the Great Depression—is what percentage of a society should be left in the hands of a deregulated market system. And absolutely there are people that are at the far other end of the spectrum that want to communalize all property and abolish private property, but in general the debate is not between capitalism and not capitalism, it's between what parts of the economy are not suitable to being decided by the profit motive. And I guess that comes from being Canadian, in a way, because we have more parts of our society that we've made a social contract to say, 'That's not a good place to have the profit motive govern.' Whereas in the United States, that idea is kind of absent from the discussion. So even something like firefighting—it seems hard for people make an argument that maybe the profit motive isn't something we want in the firefighting sector, because you don't want a market for fire. ”

50 likes
All Members Who Liked This Quote