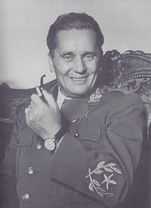 “During the war, a battle was fought here, not only for the creation of a new Yugoslavia, but also a battle for Bosnia and Herzegovina as a sovereign republic. To some generals and leaders their position on this was not quite clear. I never once doubted my stance on Bosnia. I always said that Bosnia and Herzegovina cannot belong to this or that, only to the people that lived there since the beginning of time.”