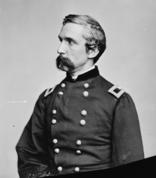 “But we had with us, to keep and to care for, more than five hundred bruised bodies of men- men made in the image of God, marred by the hand of man and must we say in the name of God? And where is the reckoning for such things? And who is answerable? One might almost shrink from the sound of his own voice, which had launched into the palpitating air words of order- do we call it? - fraught with such ruin. Was it God's command we heard or His forgiveness we must forever implore?”