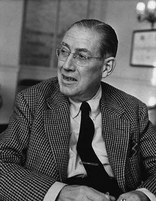 One kind of person when catching a train always wants to allow an hour to cover the ten-block trip to the terminus,
And the other kind looks at them as if they were verminous,
And the second kind says that five minutes is plenty and will even leave one minute over for buying the tickets,
And the first kind looks at them as if they had cerebral rickets.
One kind when theater-bound sups lightly at six and hastens off to the play,
And indeed I know one such person who is so such that it frequently arrives in time for the last act of the matinee,
And the other kind sits down at eight to a meal that is positively sumptuous,
Observing cynically that an eight-thirty curtain never rises till eight-forty, an observation which is less cynical than bumptious.
And what the first kind, sitting uncomfortably in the waiting room while the train is made up in the yards, can never understand,
Is the injustice of the second kind's reaching their scat just as the train moves out, just as they had planned,
And what the second kind cannot understand as they stumble over the first kind's heel just as the footlights flash on at last
Is that the first kind doesn't feel the least bit foolish at having entered the theater before the cast.
Oh, the first kind always wants to start now and the second kind always wants to tarry,
Which wouldn't make any difference, except that each other is what they always marry.”