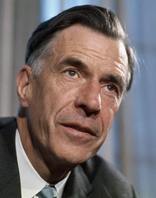 “The family which takes its mauve an cerise, air-conditioned, power-steered and power-braked automobile out for a tour passes through cities that are badly paved, made hideous by litter, lighted buildings, billboards and posts for wires that should long since have been put underground. They pass on into countryside that has been rendered largely invisible by commercial art. (The goods which the latter advertise have an absolute priority in our value system. Such aesthetic considerations as a view of the countryside accordingly come second. On such matters we are consistent.) They picnic on exquisitely packaged food from a portable icebox by a polluted stream and go on to spend the night at a park which is a menace to public health and morals. Just before dozing off on an air mattress, beneath a nylon tent, amid the stench of decaying refuse, they may reflect vaguely on the curious unevenness of their blessings. Is this, indeed, the American genius?”