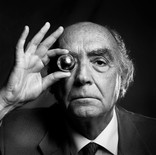 “As the days passed, it became noticeable, in a way that was, at first, imperceptible, that the word blank, as if it had suddenly become obscene or rude, was falling into disuse, that people would employ all kinds of evasions and periphrases to replace it. A blank piece of paper, for example, would be described instead as virgin, a blank on a form that had all its life been a blank became the space provided, blank looks all became vacant instead, students stopped saying that their minds had gone blank, and owned up to the fact that they simply knew nothing about the subject, but the most interesting case of all was the sudden disappearance of the riddle with which, for generations, parents, grandparents, aunts, uncles and neighbors had sought to stimulate the intelligence and deductive powers of children, You can fill me in, draw me and fire me, what am I, and people, reluctant to elicit the word blank from innocent children, justified this by saying that the riddle was far too difficult for those with limited experience of the world.”