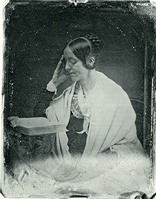 “At Chicago I read again 'Philip Van Artevelde,' and certain passages in it will always be in my mind associated with the deep sound of the lake, as heard in the night. I used to read a short time at night, and then open the blind to look out. The moon would be full upon the lake, and the calm breath, pure light, and the deep voice, harmonized well with the thought of the Flemish hero. When will this country have such a man ? It is what she needs — no thin Idealist, no coarse Realist, but a man whose eye reads the heavens while his feet step firmly on the ground and his hands are strong and dextrous in the use of human instruments. A man, religious, virtuous and — sagacious; a man of universal sympathies, but self-possessed; a man who knows the region of emotion, though he is not its slave; a man to whom this world is no mere spectacle or fleeting shadow, but a great, solemn game, to be played with good heed, for its stakes are of eternal value, yet who, if his own play be true, heeds not what he loses by the falsehood of others. A man who lives from the past, yet knows that its honey can but moderately avail him; whose comprehensive eye scans the present, neither infatuated by its golden lures nor chilled by its many ventures; who possesses prescience, as the wise man must, but not so far as to be driven mad to-day by the gift which discerns to-morrow. When there is such a man for America, the thought which urges her on will be expressed.”