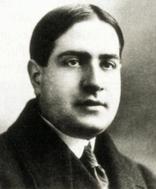 “His body and his soul appeared to have the strange ability to repel the hours, just as, inversely, a magnet attracts metal. Everything spun about him and fled; he was always the sole centre of an enormous circumference. He kept moving forwards, body and soul, in the hope of coming close to what fled at his approach. The same thing happened with time – his position remained constant in relation to the thing which, however hard he tried to clasp it to him, stole away from him and bounded into the distance. He was the one who had no incriminating papers in his drawers, who could show his diary to anyone. He was a creator. Perhaps that was why his life did not exist”