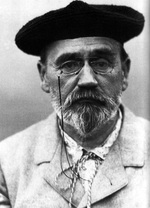 “... Have you ever reflected that posterity may not be the faultless dispenser of justice that we dream of? One consoles oneself for being insulted and denied, by reyling on the equity of the centuries to come; just as the faithful endure all the abominations of this earth in the firm belief of another life, in which each will be rewarded according to his deserts. But suppose Paradise exists no more for the artist than it does for the Catholic, suppose that future generations prolong the misunderstanding and prefer amiable little trifles to vigorous works! Ah! What a sell it would be, eh? To have led a convict's life - to have screwed oneself down to one's work - all for a mere delusion!...

"Bah! What does it matter? Well, there's nothing hereafter. We are even madder than the fools who kill themselves for a woman. When the earth splits to pieces in space like a dry walnut, our works won't add one atom to its dust.”