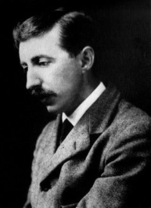 “They wept for humanity, those two, not for themselves. They could not bear that this should be the end. Ere silence was completed their hearts were opened, and they knew what had been important on the earth. Man, the flower of all flesh, the noblest of all creatures visible, man who had once made god in his image, and had mirrored his strength on the constellations, beautiful naked man was dying, strangled in the garments that he had woven. Century after century had he toiled, and here was his reward. Truly the garment had seemed heavenly at first, shot with colours of culture, sewn with the threads of self-denial. And heavenly it had been so long as man could shed it at will and live by the essence that is his soul, and the essence, equally divine, that is his body. The sin against the body - it was for that they wept in chief; the centuries of wrong against the muscles and the nerves, and those five portals by which we can alone apprehend - glozing it over with talk of evolution, until the body was white pap, the home of ideas as colourless, last sloshy stirrings of a spirit that had grasped the stars. ”