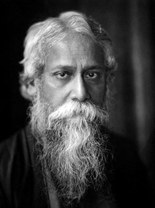 “Those who in the name of Faith embrace illusion,
kill and are killed.
Even the atheist gets God's blessings-
Does not boast of his religion;

With reverence he lights the lamp of Reason
And pays his homage not to scriptures,
But to the good in man.

The bigot insults his own religion
When he slays a man of another faith.
Conduct he judges not in the light of Reason;
In the temple he raises the blood-stained banner
And worships the devil in the name of God.

All that is shameful and barbarous through the Ages,
Has found a shelter in their temples-
Those they turn into prisons;
O, I hear the trumpet call of Destruction!
Time comes with her great broom
Sweeping all refuse away.

And with its waves they flood the world.
They try to cross the river
In a bark riddled with holes;
And yet, in their anguish, whom do they blame?

O Lord, breaking false religion,
Save the blind!
Break! O break
The alter that is drowned in blood.

Let your thunder strike
Into the prison of false religion,

And bring to this unhappy land
The light of Knowledge.”

34 likes
All Members Who Liked This Quote